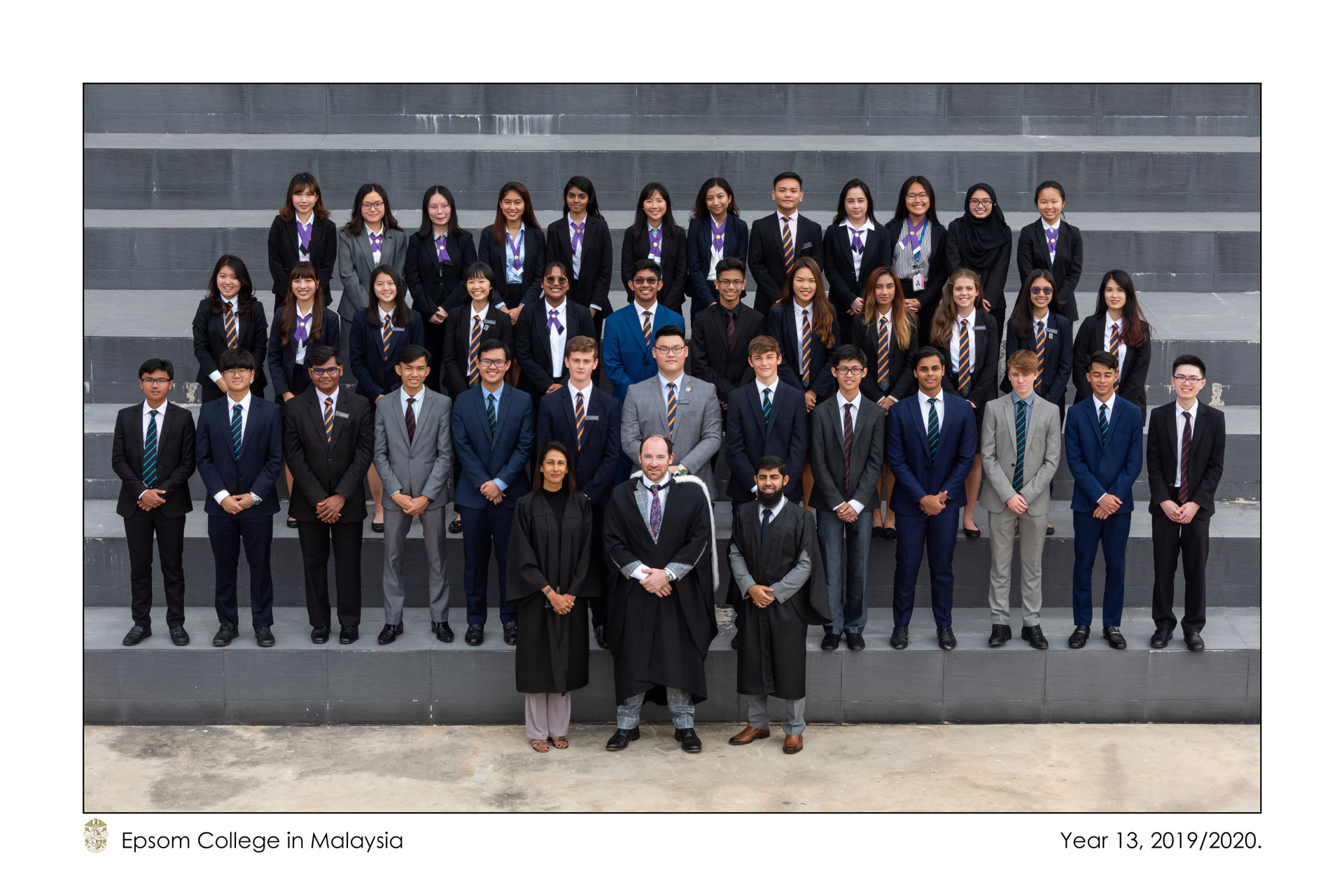 The 2020 ECiM Year 13 pupils are to be congratulated on attaining outstanding A-level results, the best achieved at Epsom College thus far!

38% of all A-level grades attained an A*

Over 80% of all results secured A*-B grades, and the ratio for A*-C grades was a most commendable 93%

The Headmaster, Dr Murray Tod, commented “These A-levels results, with 70% of all grades attaining either an A* or A grade, reflect an exceptional performance by a hugely impressive year group. The students have achieved the best set of A-level results since the College opened, with over a third of all grades scoring an A* performance.

Despite the adversity of Coronavirus and its impact upon their final year, our Epsom pupils maintained their enthusiasm and bonhomie in the face of such educational adversity. While not able to physically sit for their A-level examinations, these superb results are a true and apt reflection of their collective endeavours over the period of their studies and a suitable commendation of their academic talents. They are richly deserved and it is fitting, in the midst of such a challenging academic year, that Epsom pupils can now look forward to taking their place at such prestigious global institutions as Cambridge, Stanford, LSE, UCL, Durham, Warwick and so many others. We are proud of each and every one of them!”

ECiM is extremely proud to announce that this year’s IGCSE results are the best in the College’s history, surpassing even the record of 2019.

The Headmaster, Dr Murray Tod, commented ‘These exceptionally strong academic results typify this talented Year 11 cohort. In the midst of such tumultuous times, these aspirational students continued to work diligently towards their academic targets, consistently producing work of the highest order. Like their Year 13 peers, it is regrettable that they were unable to sit for their final examinations. Nevertheless, these final results are unquestionably a true mirror of their collective talents and they are deserving recipients of a very fine set of collective grades. Well done to them all and we very much look forward to their return to ECiM for the start of the A-level curriculum.’

ECiM is delighted to announce their best ever set of IGCSE results.

The Headmaster, Dr Murray Tod, commented  “These extremely strong academic results, our best ever, once again illustrates the academic commitment and wholehearted endeavour of a splendid group of students. The aspiration of both students and staff is to be richly commended, and I offer my congratulations to all who have participated in this success. ECiM looks forward to welcoming them into our Year 12 and celebrating their continued academic success.”

ECiM Year 13 pupils are to be congratulated once again on achieving a very good set of A Level results.

The Headmaster, Dr. Murray Tod, commented “Our Year 13 leavers, and their teachers, are rightly proud of these A Level achievements, and the final results are testimony to the hard work employed by the pupil body. We wish them all well with their future endeavours and look forward to welcoming them into the Old Epsomian (OE) fold.”

Tan Jean Ling
Biology A*, Chemistry A*, EPQ A*, Mathematics A*

Loo Shi Hao
EPQ A*, History A*, Mathematics A, Politics A

Chan Xiang Yau
Economics A, EPQ A, Mathemathics A, Politics A

Nicholas Chong Yau Lun
Economics A, EPQ A, History A, Politics A

Rachel Chan Chien Yi
Chemistry A, EPQ A, Further Mathematics B, Mathematics A*, Physics A

Rabiatul Aiynah binti Hazni
Economics A, EPQ A*, Further Mathematics B, Mathematics A*, Physics B

ECiM Year 13 pupils are to be congratulated once again on achieving a splendid set of A Level results.

As a consequence of these outstanding results, our Year 13 cohort of pupils will be accepting university places at prestigious UK institutions including LSE (Economics), UCL (Economics), Imperial (Mathematics, Biomedical Engineering), Nottingham (Law), Southampton (Engineering) and Warwick (Economics) in addition to offers from the USA universities of Austin and Washington.

Special congratulations to those students who achieved 5 A*s and 4 A*s.

The Headmaster, Dr. John Kennard, commented “Our Year 13 leavers and their teachers are to be commended on their wholehearted endeavours and achievements, and we look forward to the students’ successes as Old Epsomians at university!

Ng Eu Keat
Chemistry A*, Mathematics A*, Physics A*, Biology A
Imperial College

Ariana Ng Chor Yee
Mathematics A*, Government & Politics A, Economics A, EPQ A*
University of Nottingham

Jennifer Leighton
Geography A, English Literature A, Government and Politics A, EPQ A*
University of Sussex

Following on from last week’s excellent A-level results, Epsom College in Malaysia is delighted with the recent IGCSE results.

Congratulations to particular students who achieved 10 A*s and 8 A*s.

Headmaster, Dr. John Kennard, commented “The IGCSE courses offered at ECiM provide a clear pathway to A-level and on to university.  This year’s results show that our students are well-placed to commence A-levels in September.  They will start Year 12 in the knowledge that they will be taught by highly experienced, inspirational staff who will go the extra mile to ensure that their pupils emulate the successes of previous cohorts of ECiM students.”

Epsom College in Malaysia is thrilled once again to report outstanding A Level results announced today. Building on the superb results achieved by our first Upper Sixth in 2016 this year’s students have achieved over 60% A*/A grades and over 86% A*- B grades. The pass rate was 100%. These are remarkable results for any school, but for a new school they represent a powerful affirmation of the quality of teachers and teaching, as well as the prowess, aspiration and endeavour of the students. One third of the year group achieved all A* or A grades. Almost all students have gained entry to their first choice Russell Group universities, including LSE, Imperial College, UCL, Durham, Edinburgh, Warwick and Exeter.

The Headmaster, Mr Martin George, has stated “we expected these students to achieve very strong results, but they have, once again, exceeded our targets. I pay tribute to them and their outstanding teachers for these wonderful results. As a College we are immensely proud of their achievements and wish them well in their next steps, which for most will be taking up a place at a prestigious UK Russell Group university.”

Quok Zong Chong
Mathematics A*, Further Maths A*, Computer Science A*, Government and Politics A, EPQ A*.
Imperial College

Marissa Foo
Art A*, Biology A*, Mathematics A*, Chemistry A, EPQ A*.
UBC Canada University

Afnan Syed
Chemistry A*, Mathematics A*, Further Maths A, Physics A.
Imperial College

Natalie Chan
Mathematics A*, Physics A, Chemistry A*, Further Maths A.
Imperial College

Beatrice Khoo
Further Maths A*, Mathematics A*, Biology A, Chemistry A.
UCA University

Zulharris Mohd Anual
Economics A*, Further Maths A, Mathematics A, Government and Politics A.
Warwick University

Asyraf Muhammad
Economics A*, Government and Politics A, Further Maths A, Mathematics A,
London School of Economics and Political Science (LSE)

Jaclyn Choi
Government and Politics A, Mathematics A, Chemisty A, Biology A
San Diego University

Ariff Emi
Economics A, Mathematics A, Government and Politics A, Further Maths A.
Warwick University

Hong Bin Teng
Biology A, Chemistry A, Mathematics A, Physics A.
RCSI (Ireland)

Shannon Chen
Mathematics A*, Chemisty A, Biology A
RCSI (Ireland)

Epsom College in Malaysia again celebrates strong GCSE results with nearly 50% A*/A grades. Almost a quarter of students gained 7 or more A*/A grades. 65% of Maths results and 60% of Further Maths results were graded A* or A. Once again Modern Language results were outstanding with 100% A*/A in Japanese and Mandarin, 98% A*/A in Bahasa Melayu and 80% A*/A in Spanish. Over 70% of science results were graded A*, A or B. Headmaster Mr Martin George said that these results once again demonstrated the commitment, endeavour and aspiration of staff and students, offering his congratulations to all those who sat GCSE examinations this year.

Following the excellent Cambridge International Examination results announced on 11th August, Epsom  College in Malaysia is delighted to publish today our full A Level results. Students in the Sixth Form have worked diligently and with great application over two years and these results are the deserved outcome.

At A Level students achieved 59% A*/A grades, and 73% A*/A/B grades. These grades are the top grades needed for entry to top universities around the world. 12 students, representing 40% of the year group, achieved 100% A*/A grades. It is especially good to see the outstanding A*/A results as these are the very top results. Epsom College in the UK achieved 61% A*/A grades. We are delighted that so quickly Epsom College in Malaysia is matching the standards of our illustrious “big sister”. Particular congratulations are offered to:

Natalie Tham, who last year achieved the “Best in Malaysia” award for Cambridge International Examinations in English Literature – Biology A*, Chemistry A*, English Literature A*, Mathematics A*. Natalie will go to Bath University to study Psychology.

Jia Yi Chong – Drama A*, English Literature A*, Mathematics A, Music A*. Jia Yi will go to University College London to study Linguistics.

Krystal Teow – Economics A*, Mathematics A, Politics A*. Krystal will go to Bristol University to study Economics.

Daniel Tan – English Literature A, History A*, Mathematics A, Politics A. Daniel will go to the London School of Economics to study Law.

Danial Imran Khairul Nizam – Economics A, Mathematics A*, Physics A, Politics A. Danial will go to University College London to study Economics.

Eizlan Anwar Yeo – Economics A*, Mathematics A, Politics A. Eizlan will go to Warwick University to study Accounting.

Mashaahy Mueed – English Literature A, History A, Politics A. Mashaahy will go to Courtauld’s in London to study Art History.

Khairul Hashim – Economics A, Mathematics A, Physics A. Khairul will go to Warwick University to study Accounting.

Carol Tock – Biology A, Chemistry A, Mathematics A. Carol will go to Imperial College to study Chemistry with Medicinal Chemistry.

Li Min Ng – Biology A, Chemistry A, Mathematics A. Li Min will go to Penang Medical School to study Medicine.

We are delighted also to report the success of our first Bank Negara Malaysia Scholars. All 4 students, Danial Nizam, Eizlan Yeo, Amer Jailani and Khairul Hashim achieved 100% A*/A grades and progress to their universities of choice as outlined above. The College has 5 Bank Negara Malaysia scholars moving into the Upper Sixth in September and a further 6 joining the Lower Sixth. We are especially proud of our connection with the Bank and delighted that these excellent students have been so successful.

At AS Level our Lower Sixth students improved on last year’s strong showing, producing 66% A/B grades, again being a figure that compares well with the best schools in the UK.

All at Epsom College are delighted with this super, first set of A Level results and commend all students and staff on their achievements.